Discover the great Italica, the first purely Roman city in the Iberian Peninsula and the most important residential development of the Roman Betica, from the hand of a professional guide (Rome historian). (THE SEE PHOTOS AT THE END OF THE PAGE).

The city was founded in the year 206 BC, after the battle of Ilipa (Alcalá del Río), by Publio Cornelio Escipión, who would afterwards be called the African due to his victory against Hannibal the Carthage.  A few centuries later, the first two Roman emperors not born in Italy emerged: Trajan y Hadrian.

It is worth mentioning that just a small piece of the development is excavated, leaving a big part of the antique city buried under the contemporary city of Santiponce. Nevertheless, the magnificent amphitheatre of Italica (the third largest in the world) -amazingly preserved, is a reminder of the splendour that the city gained in imperial times.  During the visit you will get to know what a gladiator felt before appearing on the arena, how and where he used to pray to the gods, and how was the amphitheatre seen from the inside.
Famous are also the mosaics found inside the aristocratic houses, leaving clear the high economic level of the moment.

During the visit you will find out thanks to your guide not just the archaeological development but also the Roman customs and even legends from the great Italica.

Meeting Point:    Main entrance of the Archaeological Development of Italica, in the town of Santiponce, Seville..

Activity available in the following languages:    Spanish and English.

For whom?    Students. Families.  Adults without children. Elders. LGTB 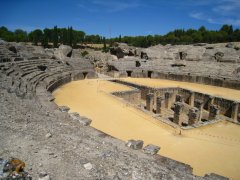 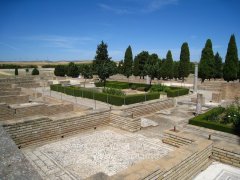 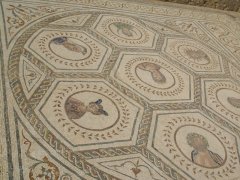 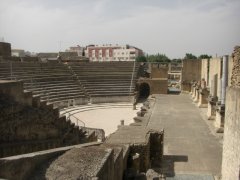